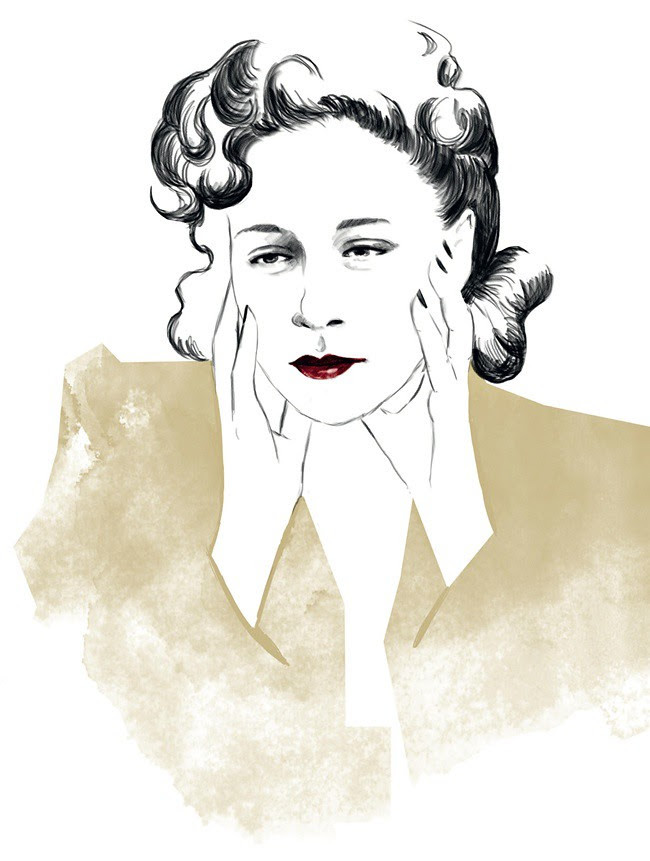 Gaby Aghion
Born in Alexandria, Egypt, in 1921, Gaby moved to Paris after the war and invented the luxury ready-to-wear concept with the creation of Chloé in 1952.
Gaby Aghion, a young political science graduate with jet-black hair, dark eyes and an elegant face, did not feel comfortable in the restrictive and full-skirted wardrobe of the 50s. She lived an aristocratic lifestyle when she came to Paris, organising her weeks between appointments with her hairdresser, fittings, shows, dinners, etc. Each social outing was accompanied by a different outfit. But her thirst for greater emancipation quickly outweighed this “Couture” period as she turned the page without hesitation to offer women a new approach to fashion. The young Gaby chose the fabrics, drew six models and had them made by the head seamstress at the atelier Lelong, and then decided to offer them herself to the fashion boutiques which were then just starting to carry ready-to-wear clothes. It was a success and today she is still the first to express her surprise at her own audacity. She set up her workshop in a maid’s room above her large flat. Once she came up with the name Chloé, the idea of “nicely sewn, accessible” dresses took hold.
In 1953, Gaby Aghion joined forces with Jacques Lenoir – he ran the business side and she ran the creative side. The duo put on the first Chloé show in 1956 at a breakfast at the Café de Flore, the epicentre of young intellectual Parisians that she mingled with. For 32 years, collection after collection, this duo developed one of the most remarkable names in international luxury ready-to-wear. 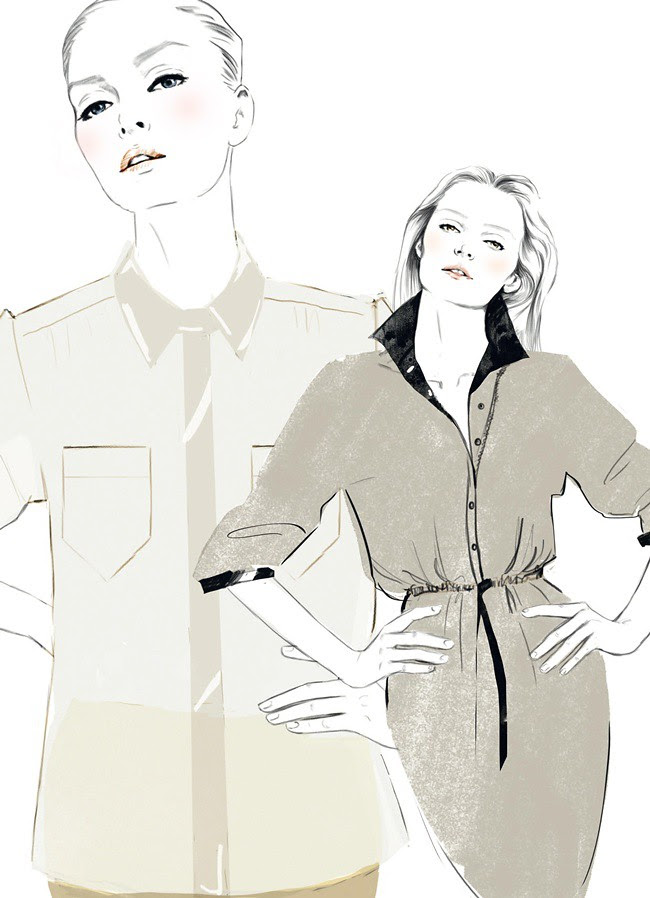 Blouse en crêpe de soie & robe embrun by Gaby Aghion (F/W 1960)
The collar, buttoned placket and silk satin cuffs give a subtle matte versus shiny contrast. This blouse is a continuous thread running throughout the history of Chloé. Here, it is softly beige, as in the 60s, nearly liquid, assertive in its masculine-feminine style. For the autumn of 1960, Gaby Aghion wanted a classic day dress that was feminine and comfortable. She thought of a boiled wool jersey like a knit, but this was hard to work with. At the time, her assistant was Maxime de La Falaise, Loulou’s mother. “Maxime suggested a supple jersey, like a man’s pullover. We drew the dress: a shirt dress that was easy to wear yet elegant, timeless like an Hermès garment. Then I realised that I couldn’t line the cuffs and the collar with the jersey, it was too thick and I wanted the collar to stand up and the cuffs to be neat. Maxime went to Chez Max on the Champs-Elysées and came back with twill fabric for ties. We lined the collar and cuffs with it. Put a satin tie at the waist. It was adorable, quite ravishing. Embrun was born. It was very avant-garde to design a dress like that, almost like a t-shirt. Women would fight over it. It had plenty of charm with its twill cravat facing. A masculine detail on a feminine garment… I have always mixed everything together. I do it because I’m carefree. This dress was tremendously successful because it says ‘I am carefree.’”, explains Gaby. 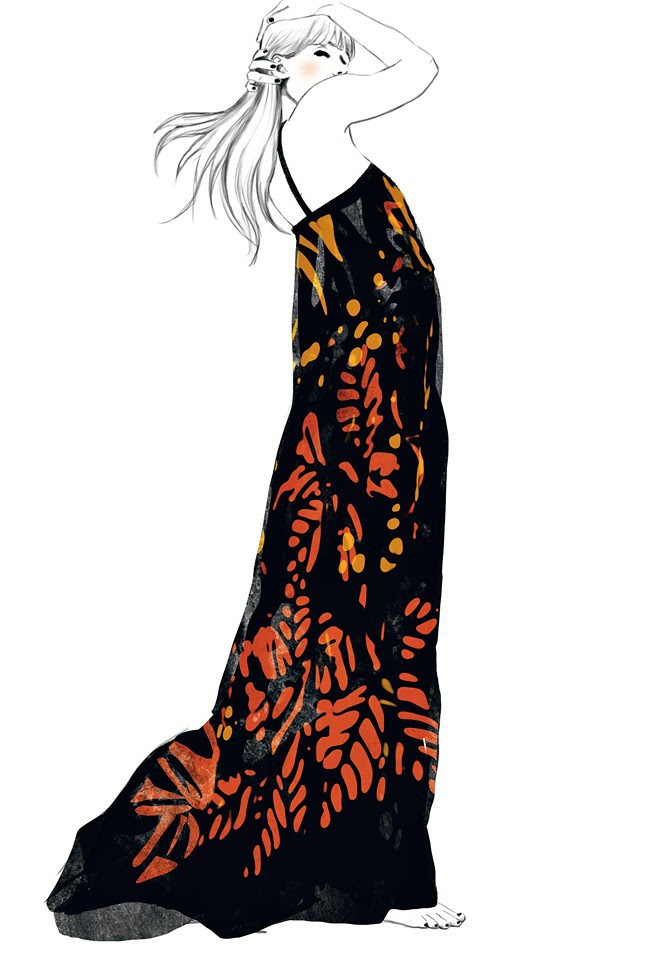 Robe galaxie by Karl Lagerfeld (S/S 1978)
Karl Lagerfeld designed for Chloe from 1965 to 1984 and from 1992 to 1996.
He left Patou in 1965, where he had spent one year. When he came to Chloé, the designer first worked under the direction of Gaby Aghion, with Maxime de la Falaise, Michèle Rosier and Graziella Fontana, before being appointed the brand’s exclusive designer on the 1st January 1975. Under his direction, Chloé became one of the most iconic brands of the 70s. Each of his collections was a happening. Only Yves Saint Laurent Rive Gauche and Sonia Rykiel could compare with him… Buyers from Neiman Marcus, Bergdorf Goodman and Saks Fifth Avenue visited the boutique in the 7th arrondissement of Paris. Anonymous customers shared long skirts and sheer blouses with Grace Kelly, Lauren Bacall, Brigitte Bardot, Anouk Aimée, Stéphane Audran, Paloma Picasso and Jane Birkin, to name but a few. For the first time, a designer became as famous as the brand for which he worked. Creating the Galaxy dress, Karl attached two fine black braces to a long dress painted with a colourful leaf motif. The impressive amounts of silk georgette cut on the bias makes the Galaxy dress dance on the body. Enveloping the bust in a wraparound effect, it is just fastened under one arm, revealing the upper thigh as the wearer walks. The hanky hem plunges lightly down the back and strokes the heel. At the time, it was designed as an evening dress. In 2013, it can be adapted to all situations, with or without a belt, with heels or flats. 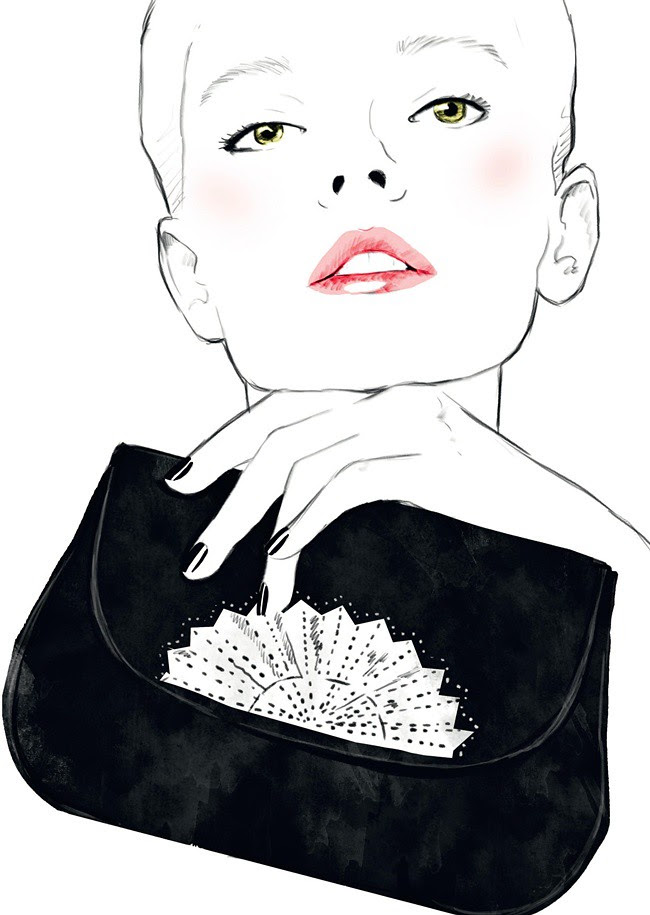 Pochette éventail by Karl Lagerfeld (F/W 1979)
The glamorous chic of this evening clutch in black suede goatskin embroidered with a silver fan comes to life in the 1979 photograph by Albert Watson. Worn like a matador’s headdress by a model with polished nails and lipstick, with all the stunning, serious beauty of flamenco. 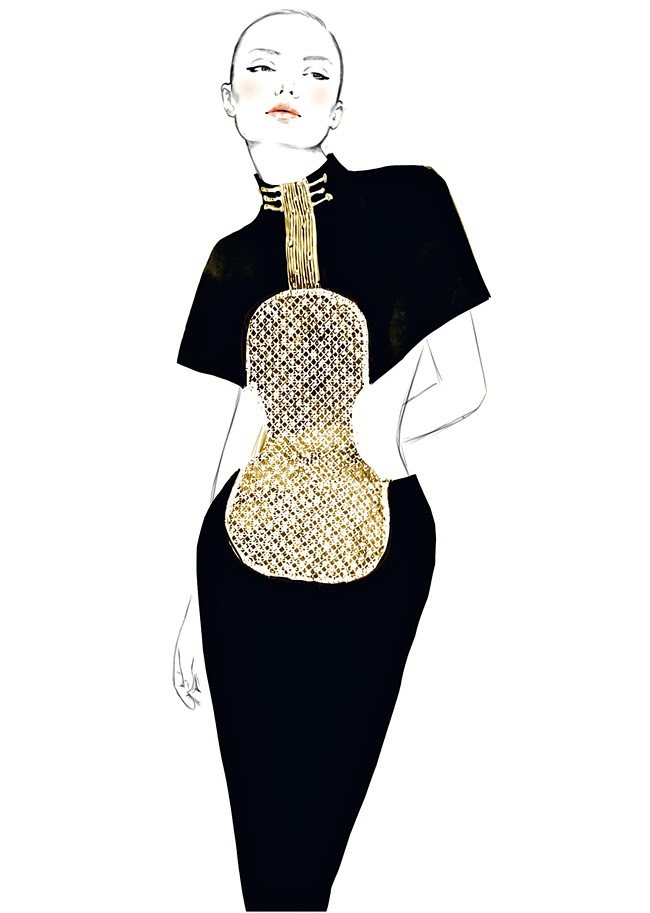 Robe violon by Karl Lagerfeld (S/S 1983)
This dress embodies the 80s. From the back it has a trompe l’oeil effect: it appears as a black and gold ensemble made up of a bolero jacket with a slit between the shoulder blades and a straight skirt on the hips. The violin motif, embroidered with pearls and gold thread, follows the natural curves of a woman’s body. Karl Lagerfeld enjoys this kind of mimicry, placing rhinestones along the strings and making the final adjustments on the bejewelled stand-up collar. It’s sexy, fun and edgy. 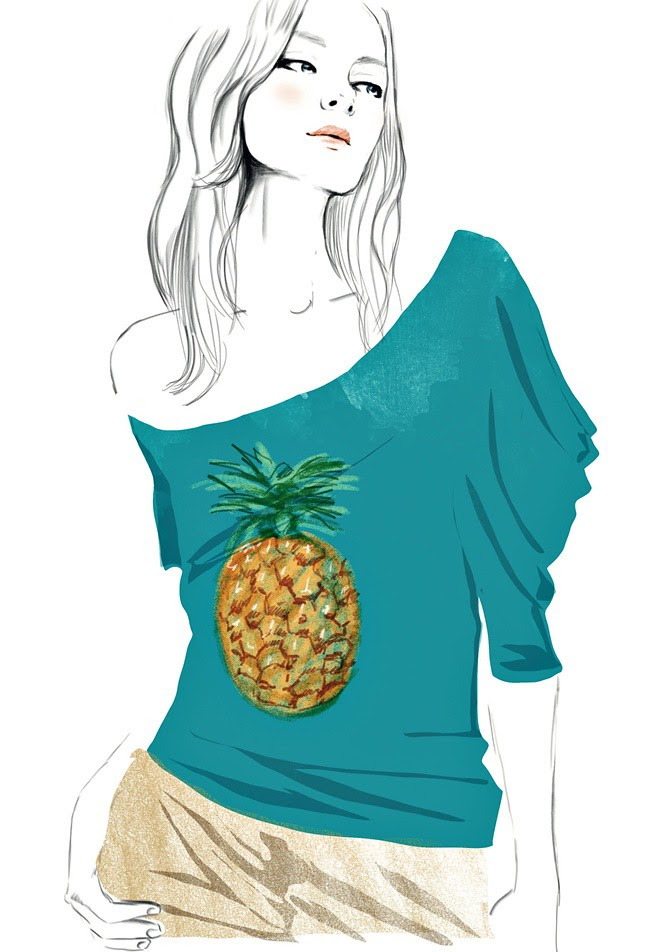 Top ananas by Stella McCartney (S/S 2001)
Stella McCartney designed for Chloe from 1997-2001.
A breath of fresh air, youth and glamour came to the Chloé fashion house with Stella’s arrival. While the young woman was inspired by her own mother, Linda, who wore Chloé, the brand also took on a vintage, sexy rock & roll tone. The evanescence of young women with long hair, softness without sentimentality in retro lingerie, the strong-willed attitude of women who know what they want, low-rise pants for a body with newfound beauty and style, printed t-shirts that sold like hotcakes. The Chloé wardrobe mixes all kinds of influences and genres. In a sort of virtuous circle, the vital energies of the street inspire this kind of luxury, which is then copied by girls everywhere.