Backstage at Salvatore Ferragamo S/S 12 & what I learned there

I was lucky enough to be granted backstage access at Ferragamo`s S/S 12 show. It was a truly exciting and crazy experience but it also was a lot different from what I expected it to be. 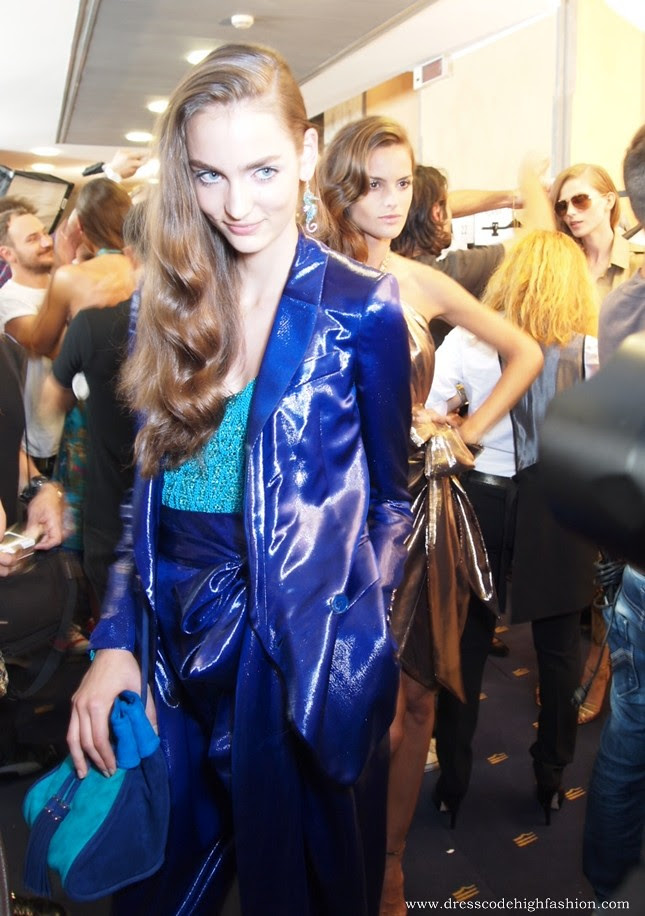 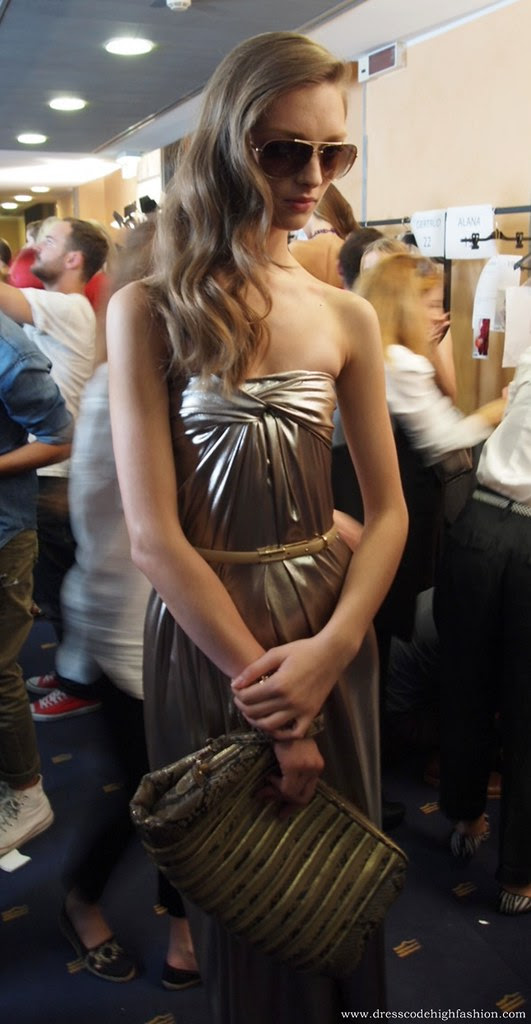 Predjudice 1: 'The cameras are always on': TRUE. I expected that the photographers would be allowed in for about 5 minutes and then kicked out. But the photographers are already waiting backstage (watching the models getting dressed) and start shooting about 10 minutes before the show begins and leave right when its over (rushing on to the next show). 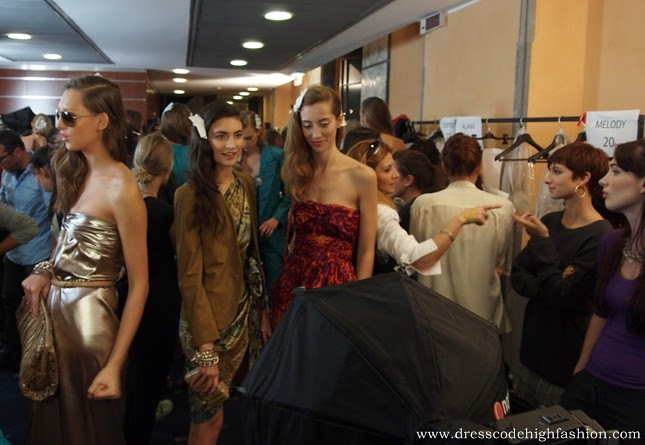 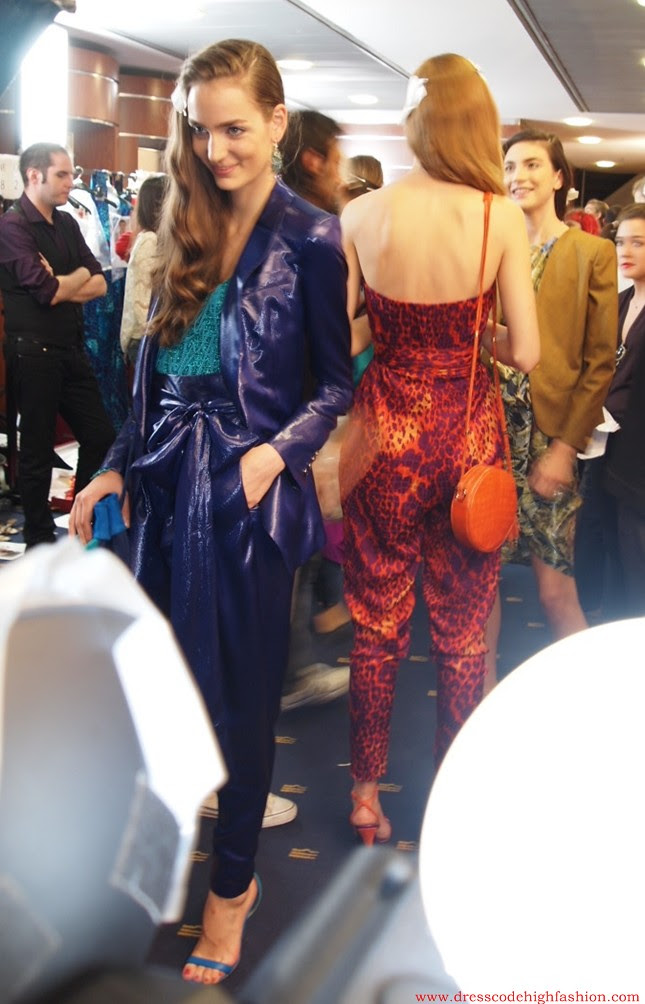 Predjudice 2: 'Backstage areas are big': FALSE. Judging by the backstage photos I had seen I had the idea that backstage areas were big. This one was small and packed with busy people. 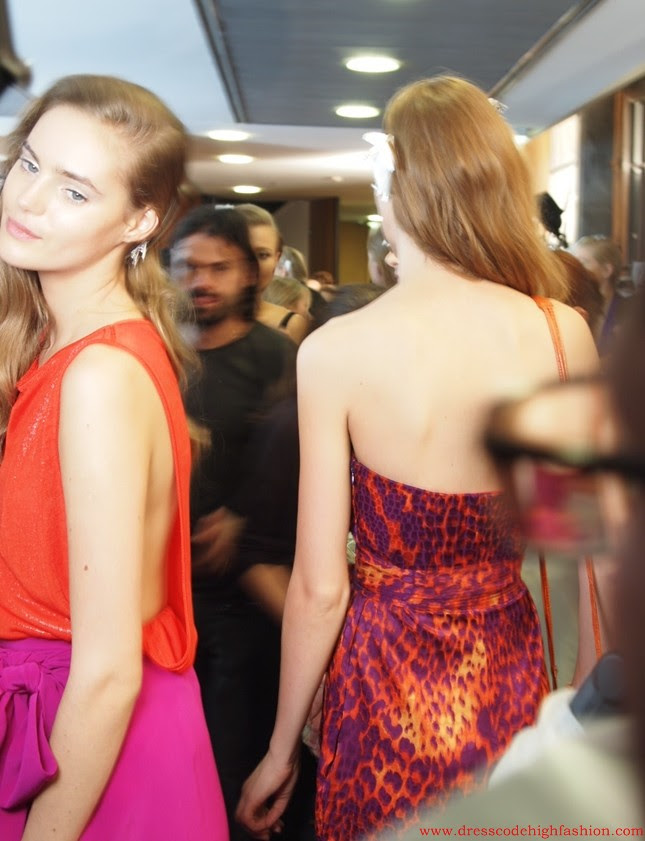 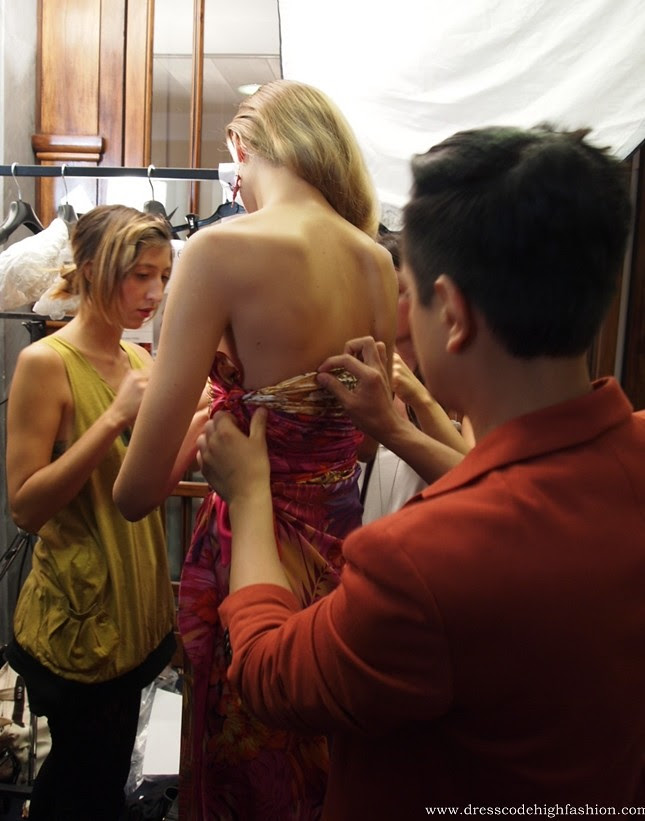 Predjudice 3: 'Models make friends in the industry': (probably) FALSE. With all the time models spend waiting backstage and how (physically) close the (hair-)stylists are getting to them I assumed that models would somehow get to know these people (if only on the level of superficial smalltalk). But I only saw models talking to other models, completely ignoring all the people styling them. 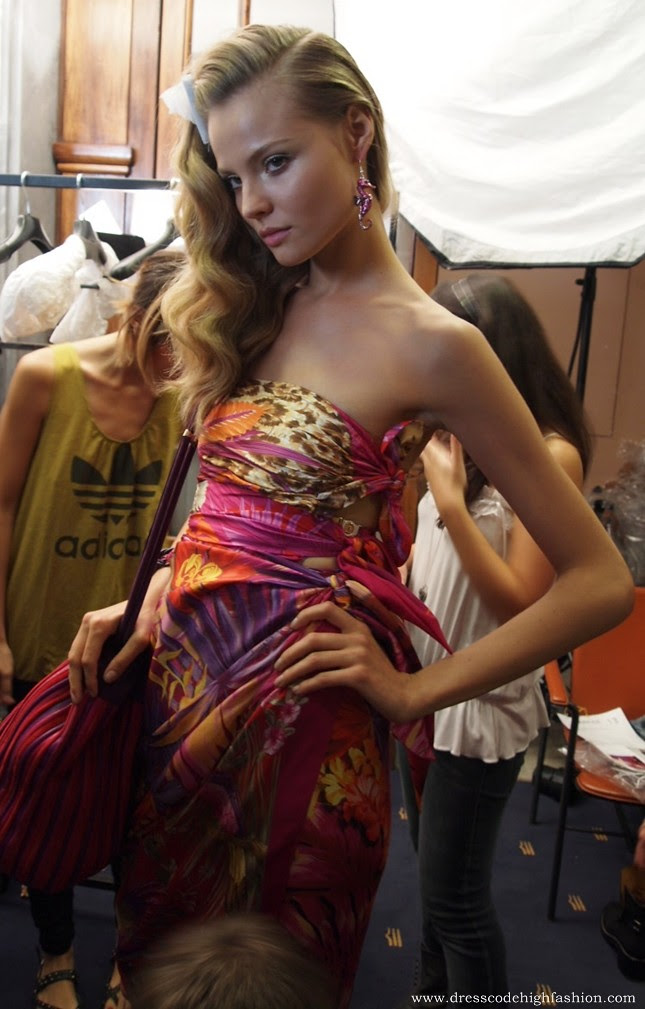 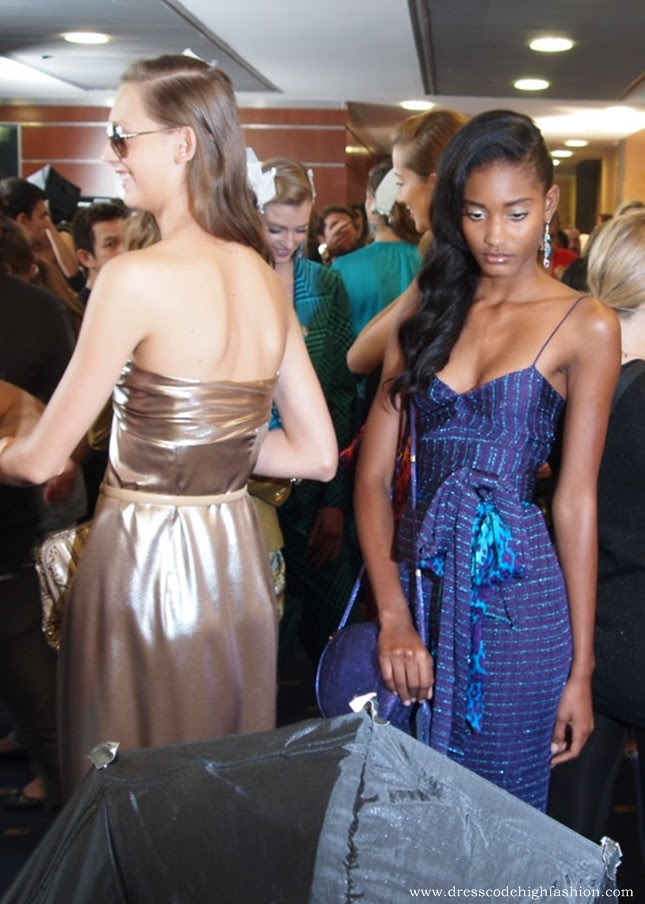 Predjudice 4: 'Models are arrogant': this predjudice is rubbish anyway. As with all other humans, some of them are nice and some are not so nice. That`s the way it is. I still noticed that the newcomers were more friendly & co-operative than the stars. (Wonder why Daga Ziober is in five pictures while I only got one blurry shot of Anja Rubik? ;) 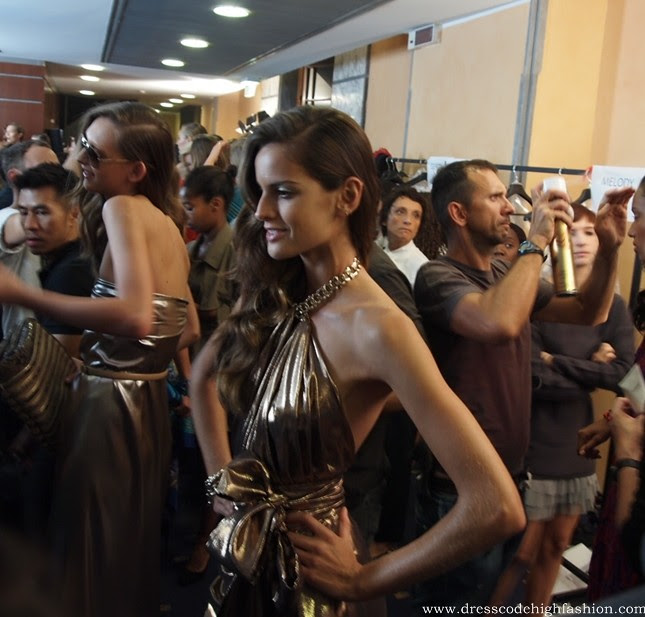 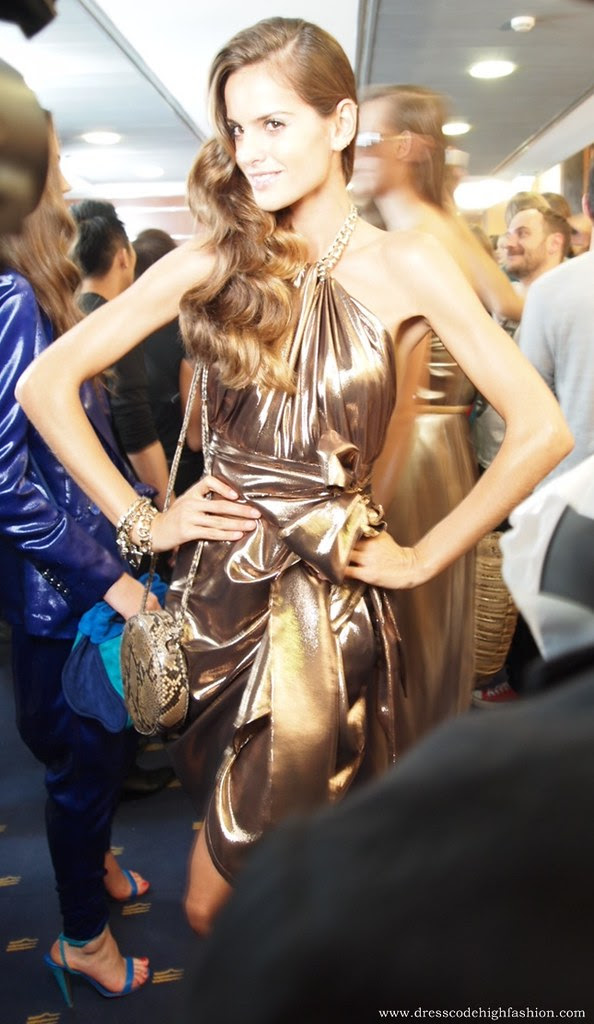 Predjudice 5: 'Models are young': TRUE. Ok, this is no news and we know this but I was stunned HOW young they actually look are when the make-up and styling is off! In pictures they look like 'young women' but they are actually young, teenage GIRLS. I`m a declared enemy of society`s obsession with youth and highly appreciate all things feminine and mature but I admit (without envy) that these girls are flawless & stunning! Also BECAUSE they are that young. It`s politically incorrect to admit but the 15-year-olds really "look better" than the 25-year-olds. You can`t really tell why but there is some kind of freshness about them. 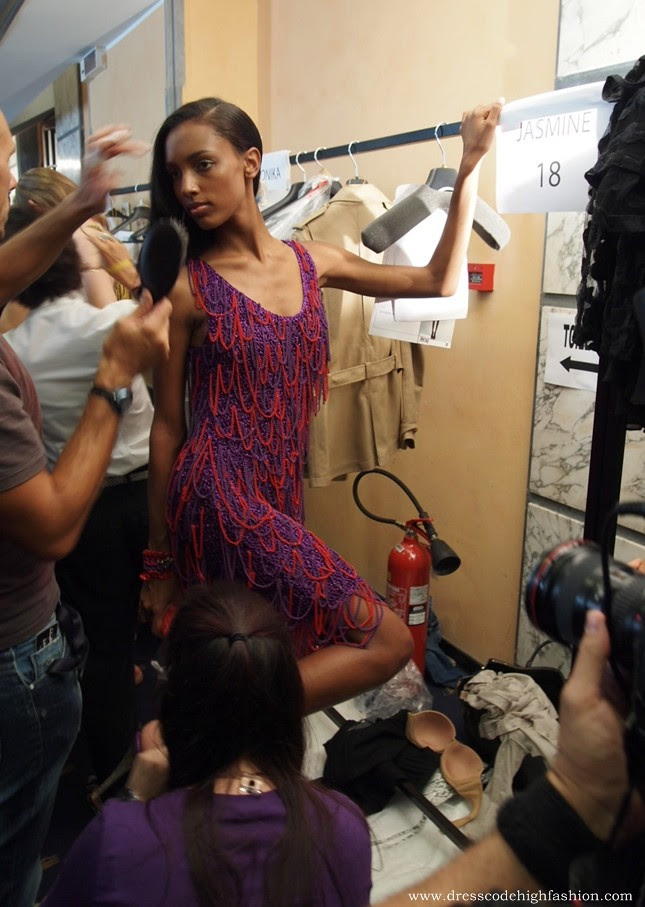 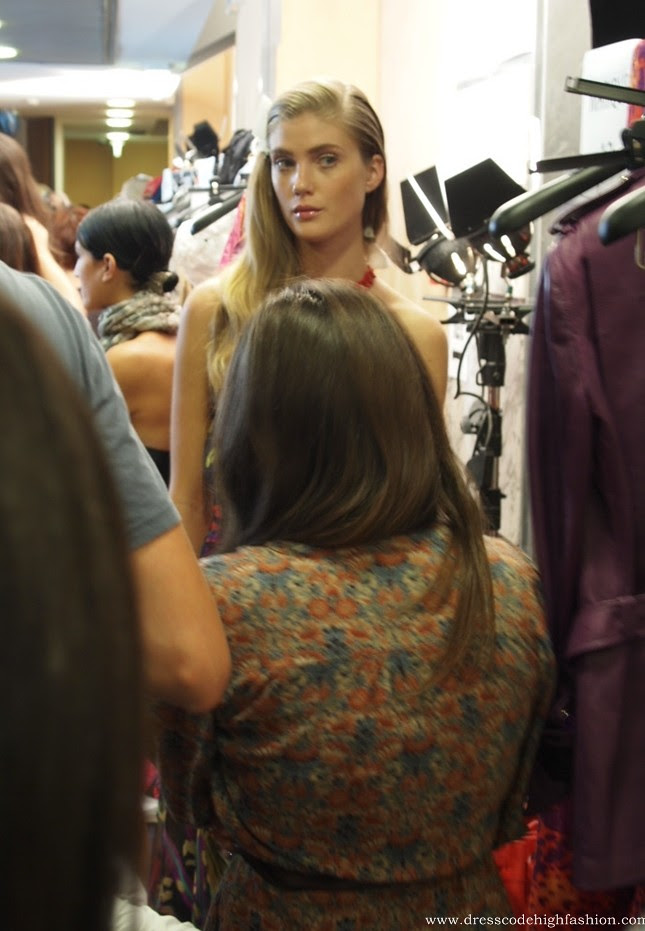 Predjudice 6: 'Models always know how to strike a pose': TRUE. Oh yeah, they do and it makes them look fabulous & glamorous. 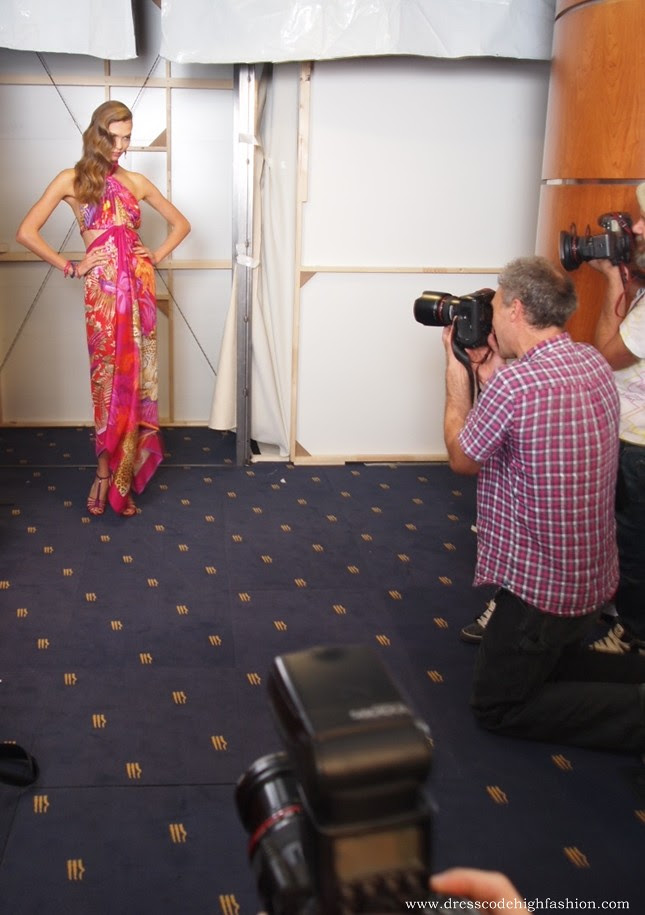 Karlie Kloss coming back in from the runway 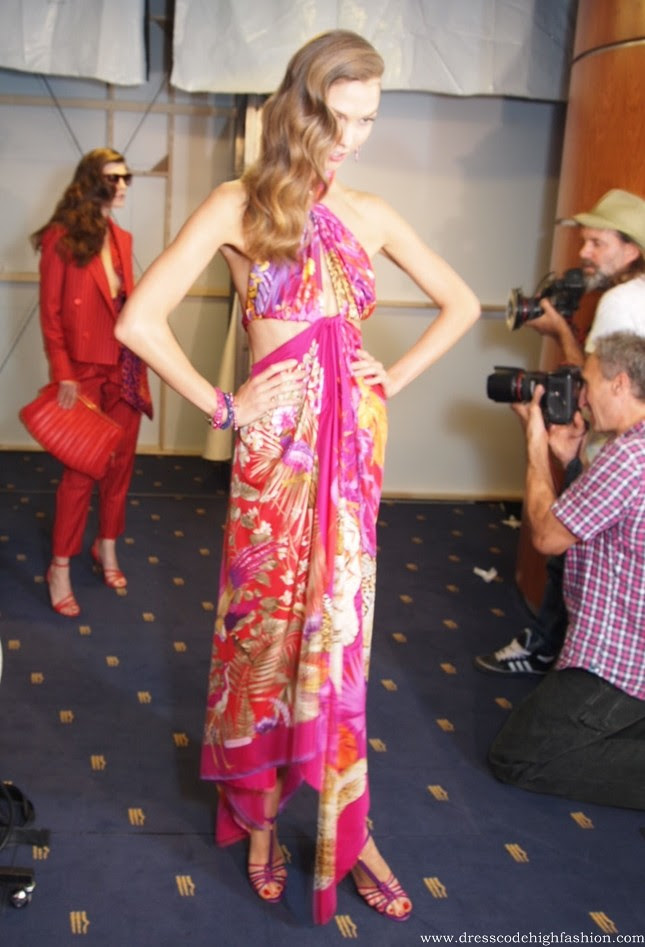 Predjudice 7: 'Models have to multi-task': TRUE. I thought that models were first going to make-up, then having their hair done and then getting dressed (maybe in different order but certainly not all at once). FALSE. It`s amazing how many people are fixing different things on one model at once! It must be annoying but the models did bear it with professional patience. 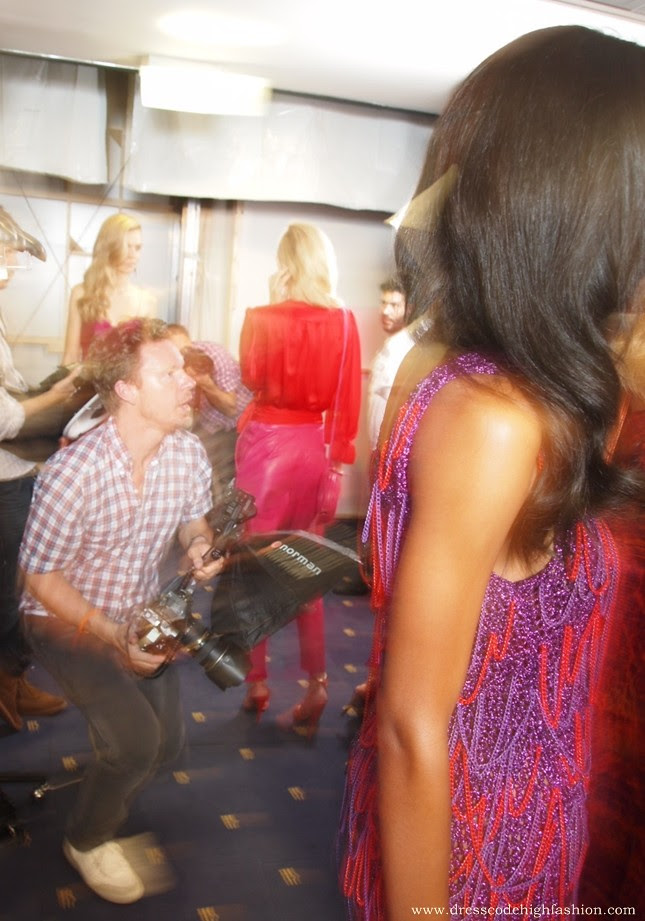 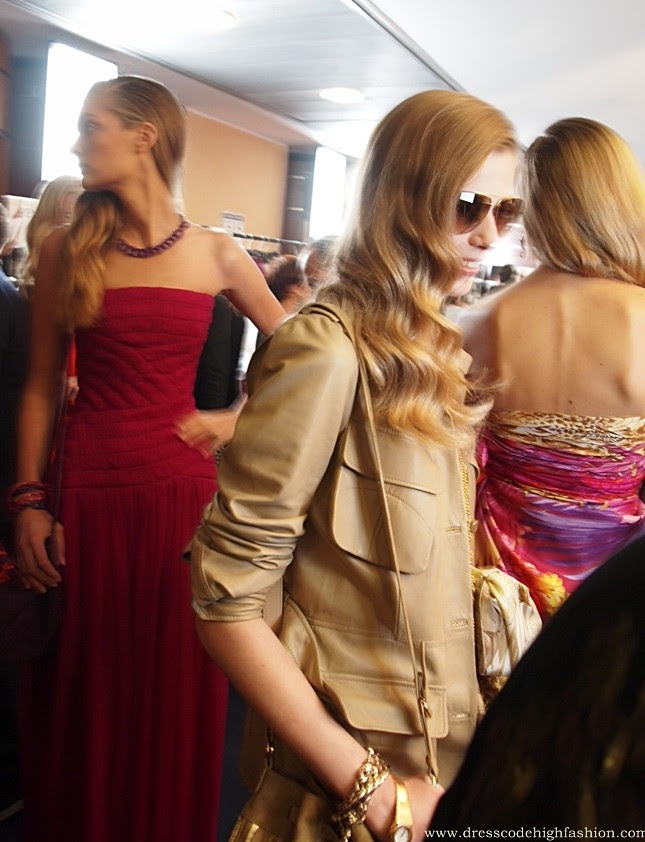 Predjudice 8: 'Models are mostly bra-less': TRUE. May it be streetsyle photos or runway, models are mostly seen without bra. Well, there are many reasons for that. Firstly, because they can :) They are young and skinny so everything is firm. Secondly because nothing is more beautiful than the natural breast. Bras (leave alone plastic surgery) are just a disturbance to nature`s perfect aesthetics. 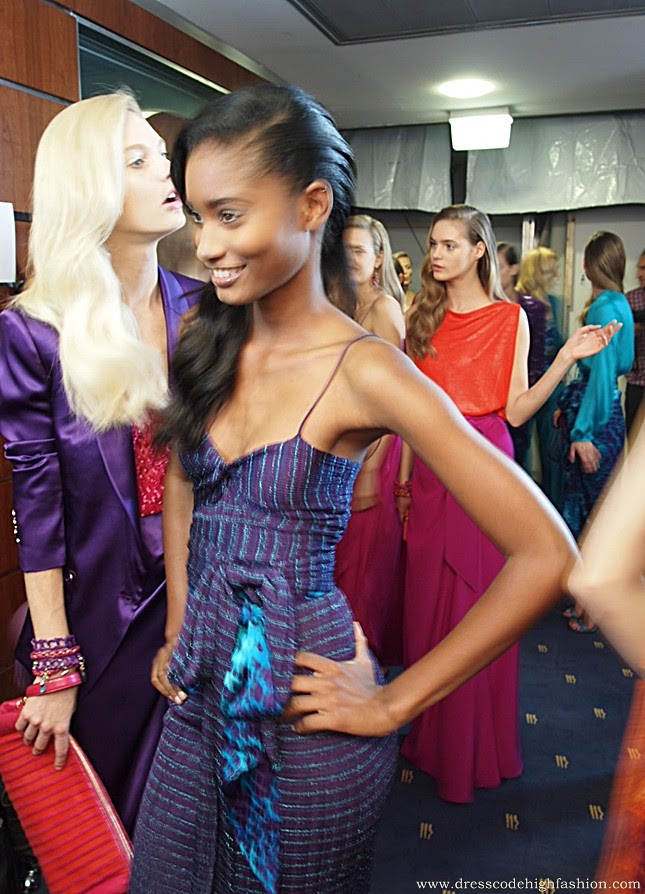 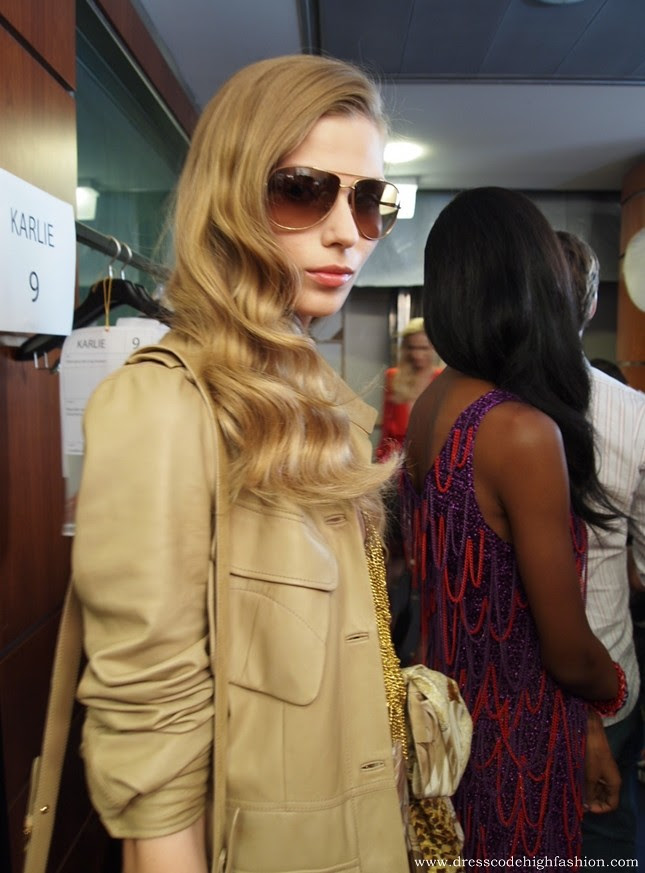 Predjudice 9: 'Models have to adjust quickly': TRUE. I was amazed how cool and collected they posed for the photographers coming straight off the runway. 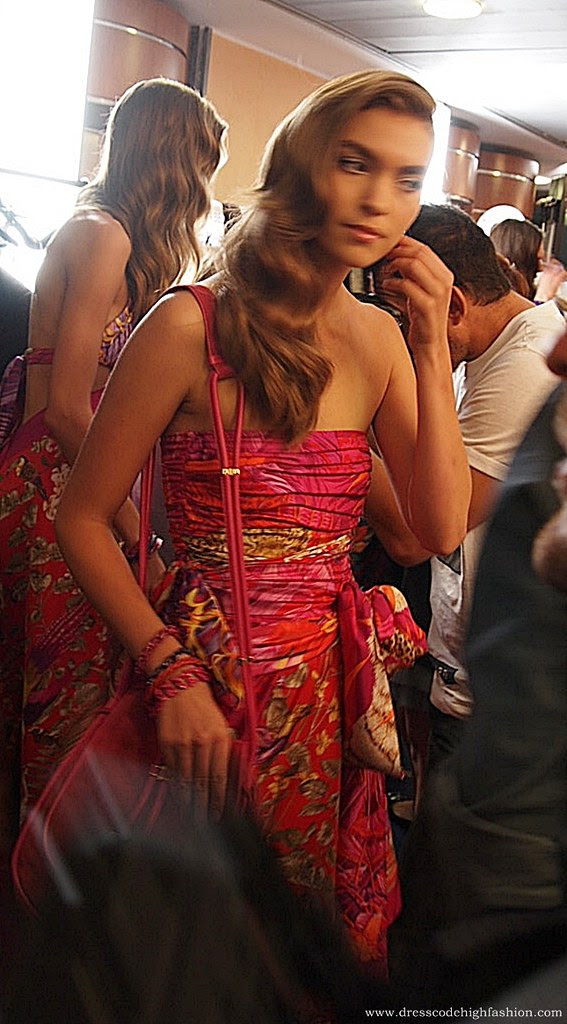 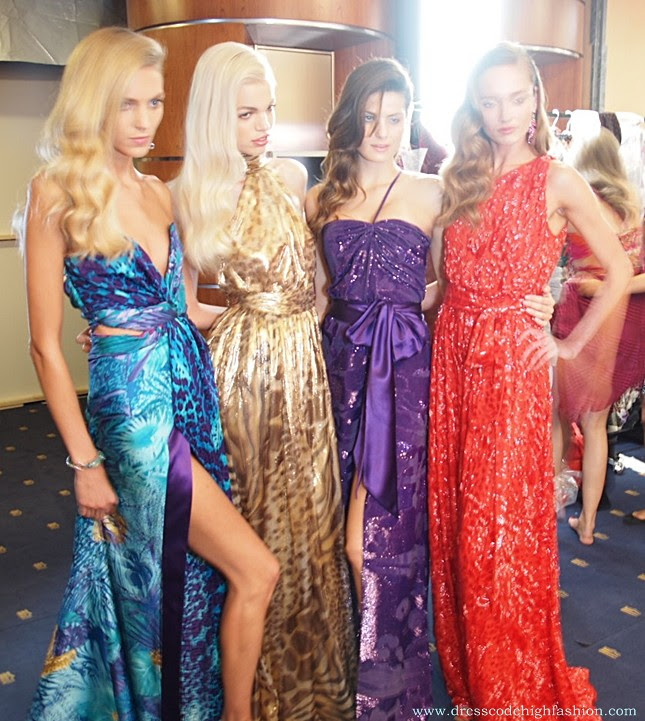 Predjudice 10: 'Photographers are sensible artists': I have this 'romantic vision' that people who produce art have a special sensibility. Well, for the backstage- , show- and red carpet photographers it`s FALSE. There is lots of yelling, pushing and making inadequate comments to the models (like 'Let me know if I can help you with body make-up or something.' Picture a 45-year-old man saying that to an 17-year-old-girl! Gross!) 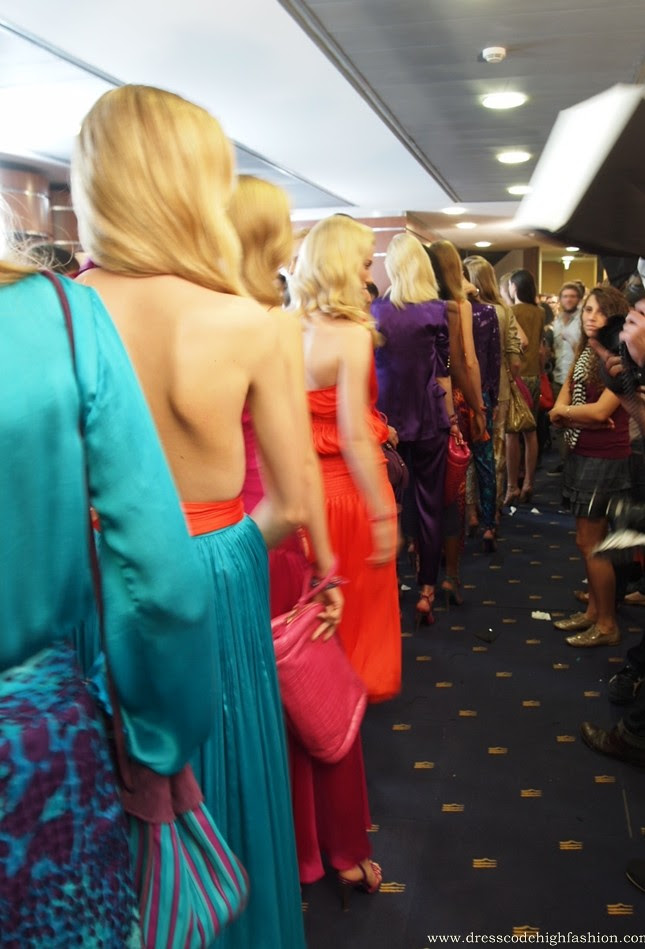 Lining up for the finale 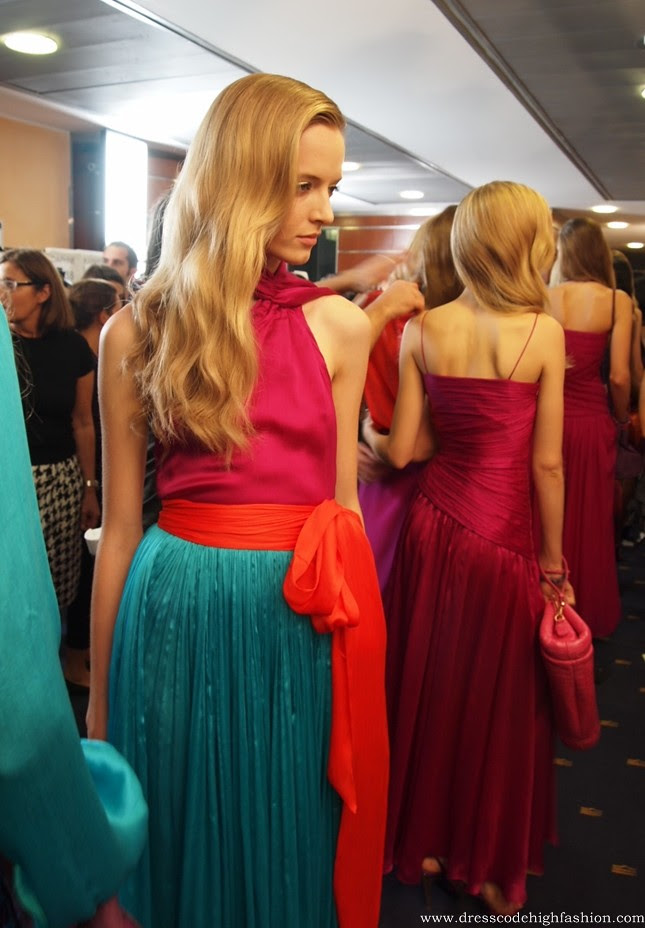 
Which picture, model or outfit is your favourite?
Eingestellt von DressCode:HighFashion um 12:00